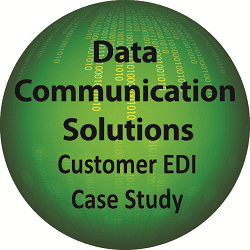 Indiana Automotive, whose EDI system is IBM’s Gentran:Server™ 400, was unable to communicate with their international customers because they were using different EDI standards. As a company in the United States, Indiana Automotive uses the North American standard X12. Their customers in Europe and Mexico, on the other hand, use the EDIFACT standard.

There were differing definitions between the forecast reports used by Indiana Automotive’s U.S. plant and Mexico regarding a held order versus a firm order. Due to time constrictions, the company was unable to manually process the following EDIFACT documents being used:

There was confusion between these documents and similar X12 documents:

DCS performed discovery and analysis on how the Mexico plant was using the documents and discovered how changes were made to the maps. One of DCS’ findings was that they had their own Custom Business Application for the IBM AS/400, creating a bigger challenge to troubleshoot and change the mapping. DCS found several causes and then remedied the document exchange and the relationship.

DCS can assist you with your EDI communication challenges. Contact us today for a No Cost Assessment!

Ron Katz has 32 years of IT experience, including 27 years of experience with EDI.  He has developed EDI software and has done consulting and programming on the IBM system I (AS/400) and Windows operating system. Ron’s other areas of expertise include Entrack™, IBM (Sterling Commerce) Gentran:Server™, and GXS Invois Trusted Link for i. He has worked with the manufacturing, healthcare, retail, and warehousing industries.

About the Author: DCS